Wing Sword Thunder, also called Yokujinraigekimaru (Japanese: 翼刃雷撃丸) in the anime and toyline, is a Rapid Fire-Type Blaster Core System B-Daman and the successor to Wing Sword. It, along with a Split Shot, could only be obtained from Limited Fire Spirits Collection 2 which was released on June 24th, 2005 in Japan for 945円.

It appears in the anime and manga series, Battle B-Daman: Fire Spirits! owned by Terry McScotty.

☀(Note:The status of this B-Daman is based on the game "B-Daman Fire Spirits GBA")

Wing Sword Thunder has a bright yellow skeleton, along with light gray arms and feet.

NOTE: All pieces of Wing Sword Thunder's Armor are essentially re-colors in a black, red, and gold color scheme. For details on the Armor in the original colors, see Wing Sword.

The Delta Roller Core is a synthesis of the Roller and Delta Cores, featuring a set of three rollers in a Delta formation, similar to the Bearing Core, albeit with a plastic roller instead of the NSK ball bearing. Due to this, it is slightly less powerful, however has better Rapid-fire. 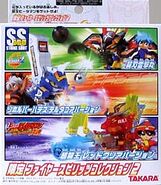 Yokujinraigekimaru on the packaging of Limited Fire Spirits Collection 2.

Retrieved from "https://bdaman.fandom.com/wiki/Wing_Sword_Thunder?oldid=48210"
Community content is available under CC-BY-SA unless otherwise noted.